In between his busy competition schedule, we had 5 minutes with Greenfield rider Gilles Thomas to talk about his recent achievements, his goals and so much more.

Hi Gilles, how are you feeling after such successful weeks? You were 3rd in the team competition of the GCT in Hamburg, were 3rd during the Sires of the World, 3rd at the Belgian championships for seniors and vice-world champion with the 7-year-old horses.

I've been 3rd several times in the last couple of weeks. These are amazing results to achieve. If I could have signed for such results beforehand, I would have. Although with a 3rd place, you’re also really close to the victory and sometimes you just really want to win. After the competition I sometimes think: "I was so close". But I am still young so I do have a lot of time left to win. This is something my uncle, Marc van Dijck, always says.

It's because of my amazing horses that have performed so well the entire season that I can achieve all these results. It's amazing that I can get the confirmation of hard work by winning a medal here.

Can you tell me a bit more about the horses you competed with this weekend?

I brought Konak for the Belgian Championships. I chose him because he performed really well the last few months. He was 3rd in the Grand Prix of Ascona and 5th in the 4* Grand Prix of Sentower Park. I had a strong feeling I could win a medal with him this year and we did so that's really great.

For the Sires of the World, I brought both Uncas and Feromas. Uncas was a last-minute decision. He went to Tokyo with one of the Chinese riders. He was supposed to go to China, but with the corona numbers going up, I had the chance to take him to Lanaken.

Feromas was 3rd in the Sires of the World. He's only 9 years old but has made such progress this season. This is a horse with very high expectations for the future.

I also took Ermitage Kalone with me to Lanaken. He’s a 7-year-old and is actually my best horse, but we unfortunately had a miscommunication on the second day. I do have really high expectations for him in the future. When I think about my first championship wins with the seniors. It'll probably be with him.

With Comghorla, I became vice-world champion for 7-year-olds. I've only been riding her for 10 days. Last weekend, we went to our first competition so it's all still very new for us. I just have to get to know her a bit. She did actually make it to the final and became 2nd. She is an excellent horse as well.

Do you feel extra pressure because you've only known her for 10 days?

She felt really great the first day. I don't know her too well so I don't always know what to expect with her. With the other horses, you can really ride for the medals, but with her I just had to see where it went.

How do you deal with the pressure of competing each week on a high level?

My friends and family always say:  "Gilles doesn't have stress". However, I do have stress, but I'm just really good at hiding it. I can deal with stress really well. The more stress I have, the more I am focused. I strongly believe that there should be a level of stress. The pressure is part of the sport and the more experience I gain, the better I can handle it.

There are so many good riders in Belgium. I really try to do my own thing and perform well. Then they might ask me in the future. I am not purely going to focus on that because I am still young. I also haven't been part of the first team that much. I am just going to do my best and if it comes it comes, but we'll see.

You've already had some nice achievements for such a young age. But which achievement are you most proud of?

In general, all my horses have been in great form. They're all horses that I got as a young horse and that I brought up to higher levels myself. This is something I've been doing my entire life. I've never had horses that were fully educated or very expensive. It's not a specific achievement that I am the proudest of but more that I've build all my horses myself. 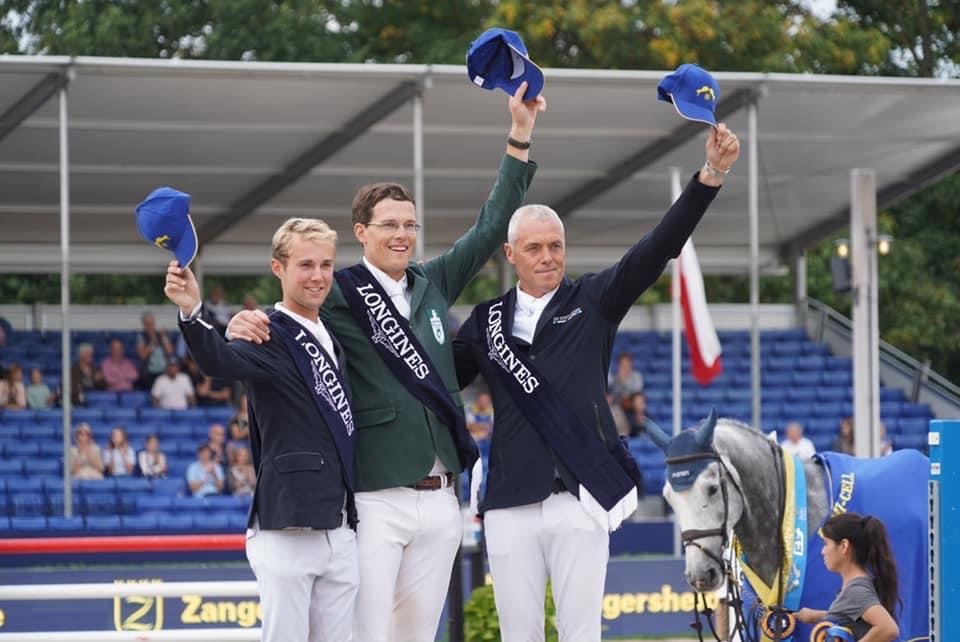 What are your goals?

Last weekend, I've already achieved one of my goals, a medal at a senior championship. In the future, I'd love to go to a championship like a European or World championship or even the Olympic Games. I already got to ride these championships with the juniors and young riders, but it would be absolutely amazing to ride them with the seniors.

You've been performing really well the last couple of weeks. But how do you deal with bad results?

There are always some periods where it doesn't go that well. I had a really good season so I always had some good performances to look back to. I used to find it really difficult to deal with the bad results, but I've learned to analyse it better. With the experience I've gained the last couple of years. It's also a different week each week. I do have a winners mentality so I don't like to lose at all. It's always a bit difficult to lose, but it makes me work harder on Monday morning.

What's the plan for the rest of the year?

Who is your biggest example?

Since I was little, my biggest example has been Marcus Ehning. I admire the way he rides and he's a hard worker. I experienced this vividly since we are both part of Valkenswaard United.

As of this year, you are part of Valkenswaard United. How is it to be part of a team with Edwina Tops-Alexander, Alberto Zorzi, Marcus Ehning and Peder Fredericson?

It's fantastic to be part of Valkenswaard United. Last year it was a dream and now it has become reality. By working and riding with them or just watching them, I've already learned so much. They also give me a lot of confidence when I ride for the team.

How is it to be asked to join that team? How do you feel when you get that phone call?

Last year, I was part of the Miami Celtics, but they chose a different U25 rider. At the last moment, I got the call from Valkenswaard United. It's a real honor as it's the home team of founder Jan Tops. It's also confirmation that I'm doing really well.